Learn tips for editing sound effects, dialogue, Foley, music and more to ensure your audio post projects are always delivered in sync with the image.

A film would not be successful if its soundtrack was out of sync with the picture. As sound artists, it is our primary job to make sure that the content we are cutting is in line with the image, or else the viewer's experience is ruined.

Sound artist Matt Yocum (Pet Sematary, The Cloverfield Paradox) goes through the intricacies of syncing sound and guides us through a few examples of sync issues a sound editor may encounter. He also shares some tips for syncing sound easier as well as some common oversees to avoid. Although this video focuses on audio post-production for film, Matt also covers some technical aspects of working inside a Digital Audio Workstation (DAW), such as Pro Tools, to understand how to fix sync issues quickly & confidently, and also reminds us of some super useful Pro Tools shortcuts which can speed up our workflow.

As sound artists and editors, whether you’re editing dialogue, sound effects, foley, or music, one of our primary jobs is to make sure that our sound is in sync. This may sound obvious but when looking at a Pro Tools session one can quickly see the difference in experience between an editor that really grasps this process versus one thats just coming close. The thing is most films we watch are 24fps, but sound is sampled anywhere between 44.1 to 192 cycles per second! That means we have a lot of wiggle room in terms of sync with audio as compared to video.

A Dive Into Video Files:

You can always trust the video file will remain in sync when you are using an approved codec such as Avid's DNxHD or Apple's ProRes, which are empirically shown to hold tight sync during playback. Although H264's are very common because they are much smaller, they have shown to be unreliable. You can always use frame by frame sync as our solid reference point, so always remember to ask for timecode on the picture from the video editor.

A Little Bit of Tech:

Video is a series of still frames, measured in Frames Per Second, or FSP. Frames are very convenient because you can move frame by frame during editing to look for sync and to hit moments precisely. Most films are shot in 24fps, where one frame is ~42ms long. In audio you also have the option to work within a single video frame because there is no frame rate for audio, when doing so, we rely on the production guide track for sync to avoid doubling and phasing. Subframe sync is extremely useful since not every transient occurs on the frame edge on screen, and audio can help us split the difference.

Details to Keep an Eye Out For:

You always want to be careful to avoid “flamming” with production, always reference back to the production track. Transients, such as footsteps, don't always need to line up exactly on the frame edge but transients should typically line up with one another within half to quarter frame to avoid flam. Remember, communication within your team is key — if you're experiencing an issue you need to let your supervisor and/or dialogue editor know to mute production on their end so you can achieve an effect on your end.

Not every effect that we put in sync has a hard transient. Sound designed elements like whooshes and sounds with longer attacks and decay, may simply take “feeling” them out until they fit right to the image. Sometimes, especially in the case of weapons design, explosions, etc we can forsake perfect sync in order to create a rhythmically cool sound as long as it still feels glued to the action on screen

Unless it is omitted creatively, sync is an essential detail for a pleasant viewing experience.

Here's the link to Matt's film template which can also be found in a previous blog post of his: File Management Tips for Organized Pro Tools Session 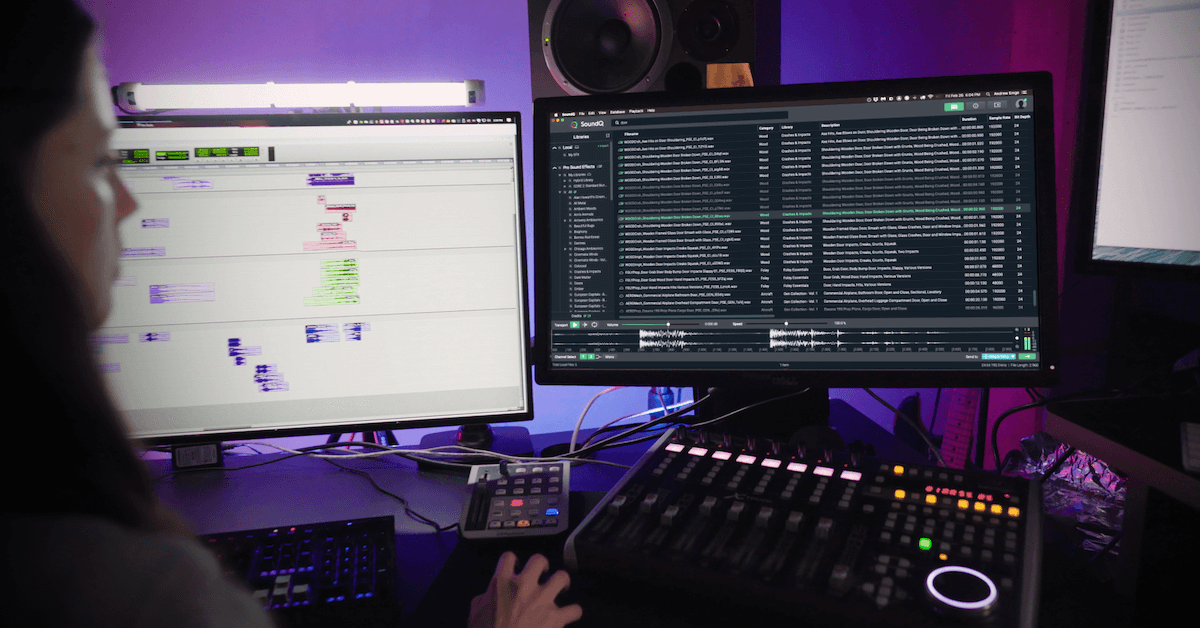